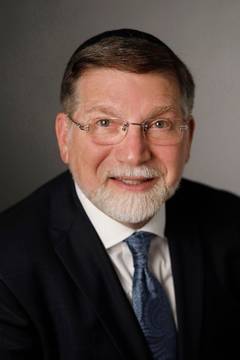 Every Passover as I sit with my family at our Seder I inevitably think of my paternal grandfather. I never met my grandfather after whom I was named.  He died five years before I was born, and I was born on the anniversary date of his burial.  But I felt from earliest childhood that my grandfather was present, teaching me the values that helped shape my life.

My grandfather was an outstanding Torah scholar.  He was ordained at the famous Slobodka Yeshiva in Lithuania from where he emigrated to the United States with his parents and siblings around 1910.  He served as a Rabbi in Chicago where he was respected as one of the leading Torah scholars of the city.  He was a prolific author who published widely in Torah journals, and he was one of the founders of the Chicago Yeshiva, Hebrew Theological College.

One of the most important aspects of my grandfather’s legacy is a lesson I discuss at our Seder. My grandfather had a tremendous commitment to Religious Zionism that affected my family and inspired my late father and his siblings.  So important was Israel in my grandfather’s life that, during the 1920’s, he purchased a parcel of land in the N’Vai Yaakov section in northern Jerusalem. At that time the Religious Zionist Mizrachi movement had built a synagogue in N’Vai Yaakov, and I guess my grandfather thought that if he would move to Israel, this would be a good place to settle.

Although he never was able to realize this dream, when my parents attempted Aliyah in 1949, he gave them the deed to that parcel of land.  Unfortunately they soon found out that north Jerusalem was under Jordanian occupation, and at that point in time their deed was worthless.  After the Six Day War, my grandmother tried to validate her deed, but this time the State of Israel itself intervened. Under the power of eminent domain, it had claimed the land for an army base. My grandmother received a little compensation but not the ownership of my grandfather’s dream.

I recall this story ever year when we reach the section in the Haggadah that recounts how the five great sages, Rabbi Akiva among them, were so engrossed in their discussion of the Exodus story that they needed to be reminded by their students that the night had passed and it was time to recite the morning Shema.  My grandfather, in his commentary on the Bible, Hadat V’Hachayim noted that the Shema contains an important message that should not be lost on the reader.  In the second paragraph of the Shema it begins in the plural with the words, “And you (plural) are to teach them to your sons to speak in them.”  But suddenly in mid-stream the verse turns to the singular tense and declares, “when you sit at home, and when you journey on the road, and when you go to sleep, and when you rise”.

Why the switch of tenses?  My grandfather answered that the verse reflects the true reality of Jewish education.  On the one hand the verse begins with the plural, representing the community’s responsibility to insure that educational institutions exist in a community. So important is this aspect of communal life that the

Talmud powerfully warns every community not to fail in this realm: “And Reish Lakish said to Rabbi Yehudah Nesiah, “I have

received the following tradition from my fathers,… Any town in which there are no schoolchildren studying Torah is eventually destroyed.  Ravina said: It is eventually annihilated” (Shabbat 119b).

But the community is only one partner in education.  The Torah switches from plural to singular to tells us that the other partner must be the parent.  Each Jew must be an educator. The community can build wonderful educational institutions, but it can’t by itself instill the love of our heritage, and in particular the love of Israel.  Parents must impart to their children the stories that will create the bond between them and the Land of Israel and they must encourage direct involvement in helping Israel.

If we supplement the community’s job of instilling the love of Israel with parental involvement, we will impart the emotional connection that is needed.  My grandfather taught me that lesson many years before I was even born, and it still resonates with my family to this very day.