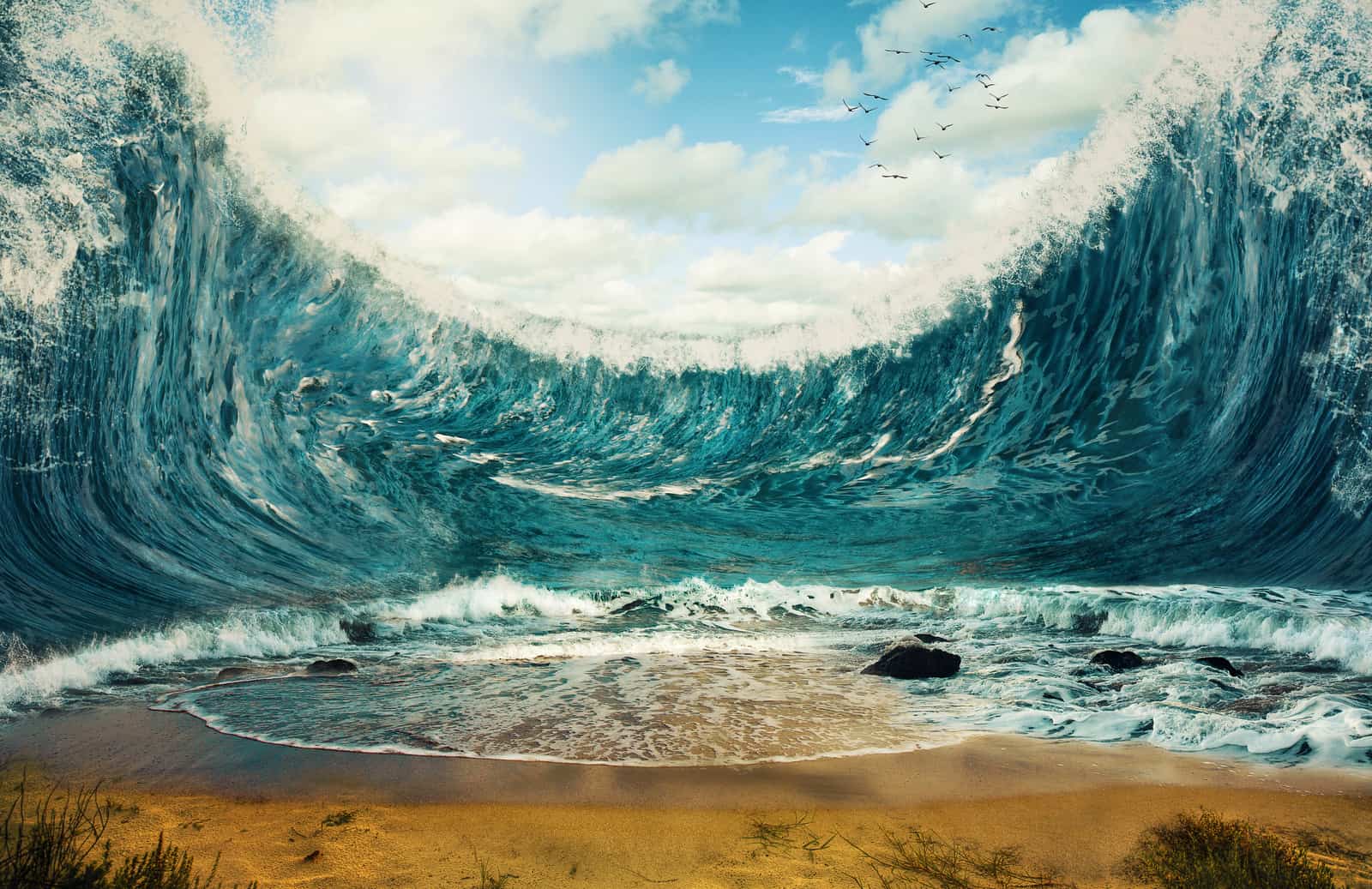 Splitting of the Red Sea: Mothers and Song

“In congregations bless God, Hashem, from the womb of Israel.”[1] Rabbi Meir used to say that, from this verse, we can see that even the fetuses in the wombs of their mothers sang the song to God at the sea.[2]

Aside from the challenge of understanding how a fetus, in his amniotic fluid, could actually sing, we are faced with a larger task. For, even if we are to take this as a metaphor, what could be the significance of this?[3] Why did R. Meir stress that even the child in the womb of his mother sang songs to Hashem?

If a person learns Torah, intending not to follow it, he would have been better off if his mother’s placenta would have caved in on itself, and he had never been born.[4] Doesn’t this sound a bit harsh? But this statement of our Sages carries a very great message. We are taught that when one is being formed in the womb, an angel teaches him the entirety of Torah.[5] When he is born, an angel hits him on the mouth, and he forgets that Torah. So, teaches R. Meir Simcha of Dvinsk,[6] the Torah that is learned in the womb is Torah that is taught to a person, and never put into practice. In this life, however, our learning is meant to impact us and change our behavior. Thus, if a person learns Torah in this world with no intention to put it into practice, he may as well have stopped in the womb, when he was doing that sort of learning. Why be born only to continue living as if in the womb!?

In fact, we are left to wonder why we even are taught the Torah in the womb in the first place. Would this not seem to simply be an example of learning for no purpose at all?

“One who stands by a person at his time of death is to tear his clothing. What is this comparable to? To a Torah scroll that was burned, for anyone who witnesses it must rip their clothing.”[7] In the commentary of Rashi to the Rif,[8] he explains the comparison between a dead person and a Torah scroll burning. Every person, says Rashi, had the potential to learn and become a Torah scroll, and thus his death is like the burning of a Torah scroll! And what if he did not learn? If he did not become a Torah, why must he be treated like one in his death?

“Sin crouches at the door.”[9] The Talmud teaches us several things about the moment of the birth of a child that are derived from this verse in Genesis. Firstly, we learn that when a child is born, he forgets all the Torah that he learned in the womb as he enters this world. The other thing that we are taught is that a person does not have an evil inclination in the womb; it doesn’t show up until he is actually born.[10] Rabbi Yosef Engel[11] explains that, in fact, every Jew is a Torah. He was formed out of the Torah in the womb of his mother, and he is a Torah. When he is born, however, he is given his evil inclination. There is a drive in man that pushes him to do evil. This is the very same thing that keeps us from accessing the Torah, which is, in fact, what we are at our deepest core. Therefore, the very same words of the Torah teach us that at birth, a person is separated from himself in a sense, and brought into a world where he will battle his passions, and get to know himself.

Shlomo Efraim Lunshitz, in his Kli Yakar,[12] suggests a fascinating gematria. The word for “remembered,” zachar, is numerically equivalent to 227. “Forgot,” shachach, is equivalent to 328. The difference between remembering and forgetting is 101. The Kli Yakar explains that this is behind the statement of our Sages,[13] “There is no comparison between the one who reviews his learning 100 times, and the one who reviews it 101 times.” Therefore, the difference between remembering and forgetting is the learning of the Torah 101 times. There is only one thing about this gematria that is troublesome. Shouldn’t the word for remembering be 101 more than the one for forgetting? After all, a person begins in an ignorant state, and only after adding 101 study sessions does he then “remember”! Why is it that the word for remembering is 101 less?!

People used to review their learning 100 times in order to know it, teaches the Tanya.[14] The 101st time was simply learning for the sake of learning. As long as one is telling his child that he loves her in order that she know that information, for she is not aware of it, he is not engaging in the relationship the same way that he will once she already knows it. Telling your children “I love you” is not meant to be the way that they know that information. Only once that information is known to them can the next step of internalizing it, and living with it, begin. The knowledge of Torah is accomplished by learning it 100 times. The next time is for internalizing it, for really making it yours. When you are learning Torah, you are not adding anything to yourself at all. You are merely removing the layers that are separating you from what you are inside.[15] So, in fact, every Jew is a Torah that one must rip his clothing for. Just as when a Torah scroll is burned, even if it is wrapped in many layers, it is a tragedy, so is it when a person wrapped in many layers is lost.

The Jewish people left Egypt like a child leaving the womb.[16] It was a time that the Jewish people were being born.[17] The experience at the sea was not one that the Jewish people had earned. They had not spent the time working on themselves, and were not at the level of prophets. In fact, had they remained in Egypt one more moment, they would have sunk to depths from which they could not have been revived. This was the desperate need for urgency on the part of Hashem.[18] And yet, the maidservant at the sea saw what even the great prophets never merited to see![19]

It was just like the time that an infant spends in the womb of his mother. The Jewish people were brought to great levels of understanding, which they did not earn or deserve. We will always look back to the exodus to know what it means to be a Jew, and we will mention it every day, and in so many of our blessings and prayers.[20] The song that we sang at the sea was the song of the fetus. It is the song of pure potential. Nothing has been earned, and nothing is separating us from who we really are. That purity, what we are made up of, is something that must always be on our minds. We are not learning Torah and fulfilling its commands in order to change who we are, but rather to discover that information. It is fundamental that we remember that our job in this world is simply to peel off the garbage that is separating us from ourselves. You are a Torah. As your body was being formed of the physical cells, your soul was being formed as a piece of truth and nothing more. If you become lost, it is a Torah that became lost. And if you can peel through the layers that are hampering you, you will discover that you really knew all that Torah all along.

[6]           Meshech Chochmah, intro to Shemos. The same explanation is advanced in the name of the Vilna Gaon in Maalos Hatorah by R. Avraham, his brother.

[8]           See Chida in Shem Hagedolim (shin, Rashi) that the commentary of Rashi to the Rif was not written by Rashi, and is rather from another medieval commentator.

[15]         See commentary of Vilna Gaon to Mishlei 16:26, s.v. nefesh amal. See also the comments of his brother in Maalos Hatorah regarding “Yagati umatzasi,” for a person is finding what is really his all along, and he simply was having trouble accessing it.

[18]        Zohar Chadash, Yisro 31a, speaks of God taking the Jews from the forty-nine powers of impurity to the forty-nine levels of enlightenment. The Zohar there explains that this was the true kindness preformed by God in the exodus from Egypt, and therefore, the exodus is mentioned a total of fifty times in the Torah, as there are fifty levels of Binah. See Rosh Hashanah 21b, where it speaks of these fifty levels of “Binah,” and the Vilna Gaon to Mishlei 16:4, where he interchanges the levels of “wisdom” and of “holiness.” (See Ohr Hachaim on Shemos 3:8; Afikei Mayim of R. Moshe Shapiro, Pesach 29; Leshem, Sefer Hadeah II, 5:3:e. Sfas Emes, Purim 5640, s.v. issa, and Shnei Luchos Habris, Meseches Shavuos, Torah Ohr 1, and Torah Shebiksav: Terumah, Torah Ohr, s.v. vatechasireihu.) The Jews’ nearly hitting the fiftieth level of impurity just prior leaving Egypt is recorded in the Haggadah of R. Chaim Vital, and Siddur Arizal. The Haggadah of Chayei Adam quotes R. Avraham Azulai as saying this. See also Maharal, Nesiv Hatorah 12, and Ner Mitzvah 2 n. 14 (Machon Yerushalayim edition), that the Torah was given on the fiftieth day because it relates to the fiftieth (and loftiest) level. Thus, on Mount Nevo (which reads nun bo, meaning, “fifty on it,” points out Sifsei Kohen to Dvarim 34:1), whereupon Moshe reached the fiftieth level, Arizal teaches that then a nun was added to his name, making “Moshe” into “Neshama,” which he says “is synonymous with Binah, as we all know.” The same idea is brought in Shnei Luchos Habris, Torah Ohr, Veeschanan. (For more on Moshe, see Midbar Kedemos, yod, 6, where it discusses opinions as to when Moshe did or did not reach, lose,and gain, the fiftieth level.)

Rabbi Elchanan Shoff is the Rabbi of Beis Knesses of Los Angeles (BKLA) in the Pico-Robertson neighborhood of Los Angeles, 11th grade Rebbe in YULA Boys High School, Professor of Judiac Studies in Touro College Los Angeles, and author of 9 books and sfarim.